How much should you expect to feel when confronted with images of death, destruction and disasters of war? Most pictures in Tate Modern’s ‘CONFLICT – TIME – PHOTOGRAPHY’ exhibition are Black & White while colours tend to be dour and muted. But do not expect to judge these works on beauty, nor to appreciate their wit, rather they provide an unexpected answer to Marcel Duchamp’s mysterious question: “Can one make works which are not works of ‘art’?” Walter Benjamin is another inevitable referent as all aesthetics here is well and truly ‘politicised’ and the work of art in the age of mechanical reproduction finds its grim apotheosis or raison d’être in transmitting horrors of a particularly modern kind.

Wars pass in review subject to a history of technical process and representational regimes. The American Civil War, The Crimean War, the Northern Irish ‘Troubles’, Iraq, Afghanistan, Libya, Angola, WW1, Nazism and the Holocaust, divided Berlin, the Nicaraguan revolution, plus multiple ‘takes’ on the atomic bombing of Japan. Your heart is repeatedly broken and yet somehow you survive. Newly informed? Perhaps, and maybe your image of self is graven deeper as one punctum after another makes you groan – e.g. the empathy-inducing indexicality of hessian threads in a 13-year-old boy’s ragged uniform, underlined by the fact that no trace of the body wearing it in Hiroshima that day was ever found.

This macabre historical procession does little to assure you that photography does anything to lessen the likelihood of war, and yet you concede that nothing but photography could so appropriately condemn it, indeed, sometimes it seems that war and photograph were made for each other. There are ‘moving images’ of course and despite cynicism concerning the ineffectual ubiquity of journalistic representations you are ‘moved’ to discern the flickering spirit in the eyes of a middle-aged Nicaraguan woman filmed re-reading photographs made of the revolution-torn country during her youth. You drift past photographs made of specific (non-) places, at specific times -ignominious dawn- to commemorate just where and when ‘cowardly’ deserters were once executed by their peers (an act which, despite all the atrocity exhibited here remains strangely salient, monstrously perverse.) Any slight historical inaccuracy pertaining to such reconstructions matters little as they bring you only a little closer to an unconscionable reality which neither you, photography, nor history will ever fully comprehend.

So what is such an exhibition for? What can it hope to achieve? Resting beyond the exit your head drops as you try to feel again what you have just felt, to recall what you vicariously saw, of what others, in their turn, more or less vicariously saw, wanting to believe again, as you just have, now and then, for a moment or two (no longer than the exposures took to make) that your life, your time, your flesh and blood, your sky, your city and the story of your life are truly and closely connected to the images you witnessed. How fortunate and exceptional you must be not to be touched as directly as the people and places in these pictures, even though they are drawn from every where and every when and clutched by evils as monstrous as exploding trains, shrieking shells, collapsing buildings, consuming flames, boiling skies, melting faces, ruptured arteries, shattered bones and desperate gasps for one last breath. You try to imagine but this very imagining blocks the way to any adequate reality. 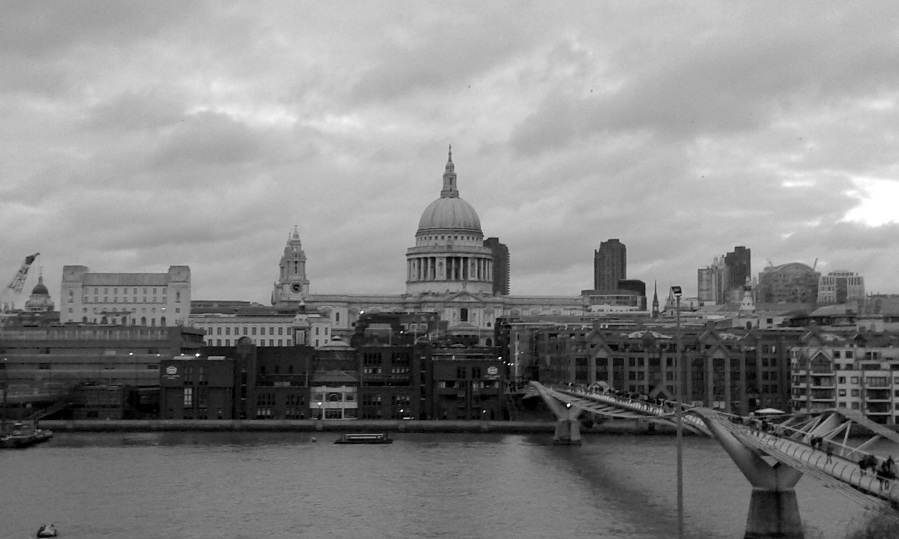 You turn your head slightly to see St Paul’s gazing back at Tate Modern across the Thames. How can you not be directly connected? You think of your mother, a WW2 evacuee, recalling iconic images of that cathedral there, surrounded by searchlights and barrage balloons, remember your father’s nightly anger throughout the 1970s at media coverage of the Northern Irish conflict. But still it is only images, memories, photographs, films -albeit supplemented, as are the photographs here, by well-meaning words. No, pictures do not really help and yet images of one kind or another are our only defense against terrible realities that no image can adequately represent. If something appears to keep you exempt from and immune to these inhuman-yet-all-too-human horrors, that rapidly turn noble aspirations to wasted lands of concrete and cobble and reduce modern subjects to savages, it is a certain aura, shielding you from believing such things can and will happen to you and to yours. It is only immaterial images – the image per se as your ‘guardian angel’ perhaps- that keeps you safe, for now at least, while this city remains intact, this society remains effective. But even as you write, wars rage not far from here, and potential wars are signposted every hour on broadcast news.

One thought on “4. TATE MODERN”