Art can be demanding, on both your time and energy. The current Hayward Gallery exhibition, History Is Now’ curates six different curator/artists, inviting each of them to produce a show within the show, and thus implicitly inviting you to explore all six show-within-shows. The theme and title allude to the way in which, despite our spectacularly futurised technological age, we seem extremely enamoured of, fascinated and diverted by History. Ours is a hoarding, archival culture that feels a responsibility to constantly sift through all the songs, films, images and ideas made readily available to us, first by mechanical, then digital reproduction.

Walter Benjamin once wrote that, for the Jewish religion “every second of time was the strait gate through which the Messiah might enter.” Similarly, our culture’s perhaps unprecedented relativism means it can discard nothing for fear it might just provide some crucial or missing piece of the great human puzzle we are always trying to complete or comprehend.

With little time, and the remaining calories from a recently gulped Flat White ebbing away, you skim through all the rich and complex sections curated by Jane & Louise Wilson, Roger Hiorns, Simon Fujiwara, Richard Wentworth and then Hannah Starkey before making a bee-line for the section curated by John Akomfrah, a British artist you have grown to know and admire as a special contributor to exploration of the special contribution made to both art and politics by a history of the moving image. 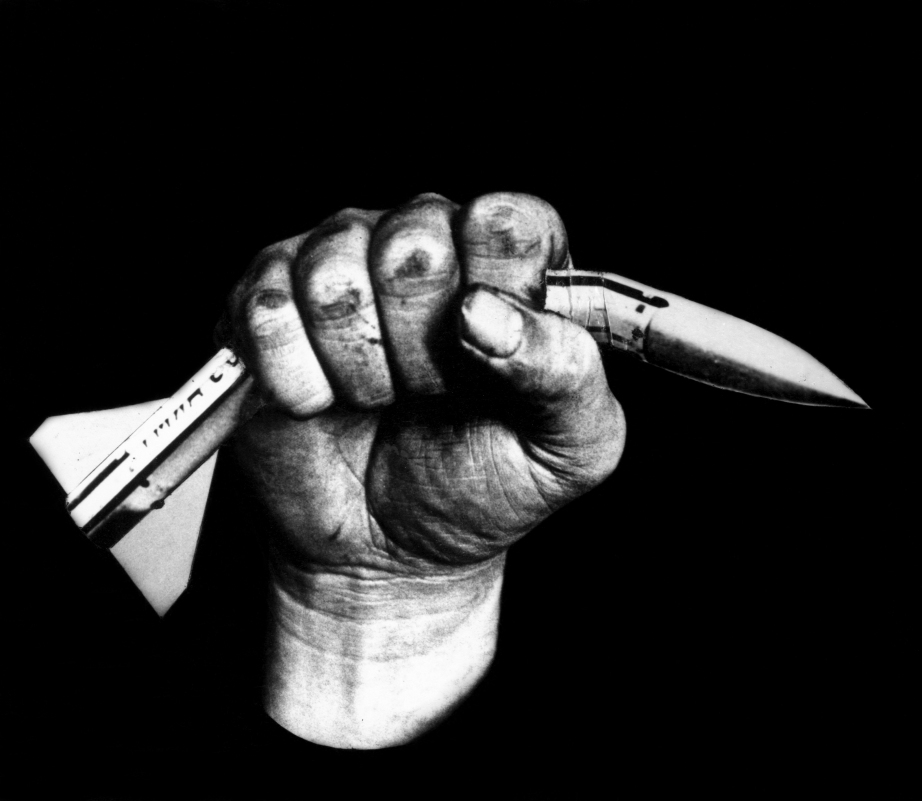 You find that Akomfrah has provided 17 films you can choose to watch, each of which will last about as long as you have left to spend in the gallery. Like someone on death row or Radio 4’s ‘Desert Island Disks’ you are forced to make even more specific choices and eventually find yourself concentrating on just one, highly instructive 1982 film, by Chris Rodriguez & Rod Stoneman, about the art of Peter Kennard who calls his photomontage “a visual language of opposition.”

Here photomontage is shown to provide a successful ‘critique of reality’ and an act of ‘unmaking’ that world given to us in the lavish image-fest of a more or less corrupted capitalist democracy. The film unpacks the roots of modern photomontage in the art of John Heartfield, Hannah Höch and Raoul Hausmann, but also in the film techniques of Eisenstein and Fernando Solanas. We see examples of juxtaposition in Surrealism and Rodchenko’s Contructivism and begin to come up to date with the controversial works of Klaus Staeck. Bertolt Brecht is also quoted, assuring us that a photographic image might tell us nothing until we start to invade and change it for our own purposes.

Kennard comes out deserving his place within this noble pantheon, having now spent a lifetime producing effective and unforgettable images e.g. in support of CND in the 80s or against the Iraq war. His image-making has always been incisive and timely, instinctively cutting-to-the-chase with a sharp, graphic sensibility and with his heart always in the right (i.e. Left) place.

Nevertheless, this film is history (Kennard is here very young and fresh-faced) and it makes you wonder where we might be today in terms of the effectiveness of photomontage and the ways in which artists might now turn their image-making skills and semiotic savvy to similar political purposes.

Today, artists like Linder and John Stezaker are among a host of artists who make some form of collage, montage or ‘mash-up’ the centre of their practice. John Russell (whose show was reviewed on this Blog) also comes to mind. We might even say that this is a golden age of collage and montage, and yet, now that we have infinitely more images at-hand to recycle, and infinitely more power to do so (given Photoshop etc.) no contemporary artist seems to have the same urgent, passionate effectiveness as the artists featured in this early 80s documentary, all of whom worked with little more than a scalpel, glue, a pile of magazines and a basic analog darkroom.

Perhaps it is true that the 1980s’ reactionary and consumerist politics severed our link with the most promising and progressive idea of History and thus with the crucial context that an artist needs to make any mark on History. Examples of an artist-as-activist who can actually help stop corrupt and insidious juggernauts from riding roughshod over our liberties now seem hard to find.

So, watching this engaging portrait of the young Peter Kennard leaves you feeling simultaneously inspired and slightly depressed, as despite all the free tools and goodies provided for us today with which we might détourné the ever-increasing flood of still and moving images loudly proclaiming the incomparable virtues of what is in truth a gross, unsustainable and unjust economic system, we seem less able to do so than ever.

Perhaps this is because we no-longer feel any traction, have no significant time to respond to the incessant and insistent stream of information that seems to have us all hypnotized, as we scroll through meters and meters of meaningless information every minute, no longer looking directly at, nor into this supposed reality, but accepting everything we are granted with a kind of naive gratitude, a childish and complicit awe, and seeing it all at merely face value

One thought on “12. HAYWARD GALLERY”