Gagosian is a spectacular gallery and Serra a spectacular artist. At a recent meeting of some renowned British critics you had heard some awed voices describe the accomplishments of this show. But you come armed with your skepticism, partly because, some years ago you were severely disappointed by some overblown oil stick drawings installed by the artist in Gagosian’s (then brand new) baroque-shaped gallery in Rome, and partly because you also recall, slightly less years ago being let down by the superhuman attempts of James Turrell to turn –in vain- this Kings Cross space into a kind of transcendent optical experience.

Most of Britannia Street is caged off, with forklifts, trucks and huge crane weights lying around where you might normally see parked cars. You assume this has something to do with Serra and the show. The enormous, sleek glass door that you enter, ushered by one of Gagosian’s notoriously bodyguard-style male attendants, has fractured into a crashed-windscreen pattern, and again you wonder if this is the outcome of an artist who deploys unusually ‘robust’ (yes, we can use that much abused word PROPERLY here) materials and methods to make his art.

There are four pieces. They all have nice names. They are all made of specially formed steel that literally weighs tons but is nevertheless manipulated into elegant combinations (we should not say ‘compositions’ here) presumably by machinery-max. Indeed, we might assume that the whole of Gagosian Kings Cross comes to pieces like a magic box to allow such works to enter and be assembled, thereby possibly making some contribution to our established understanding of the relation between object and context.

One of the most obvious words you reach for in front of Serra’s raw steel plates, lozenges and monoliths (you soon run out words for the blank shapes themselves) is ‘ponderous’ but you have little time to ponder today and so you rather irreverently weave a way through Ramble (2014). Other art-loving tourists are there, stopping every now and then to be photographed by their friends and sometimes blocking your way as you work through a series of shoulder-high, thick gravestone-like forms, placed in a way that simultaneously evokes both a Holocaust memorial and any-old inhuman complex of oppressively ‘open-plan’ work spaces – though of course the intention is more strictly Minimalist than that. 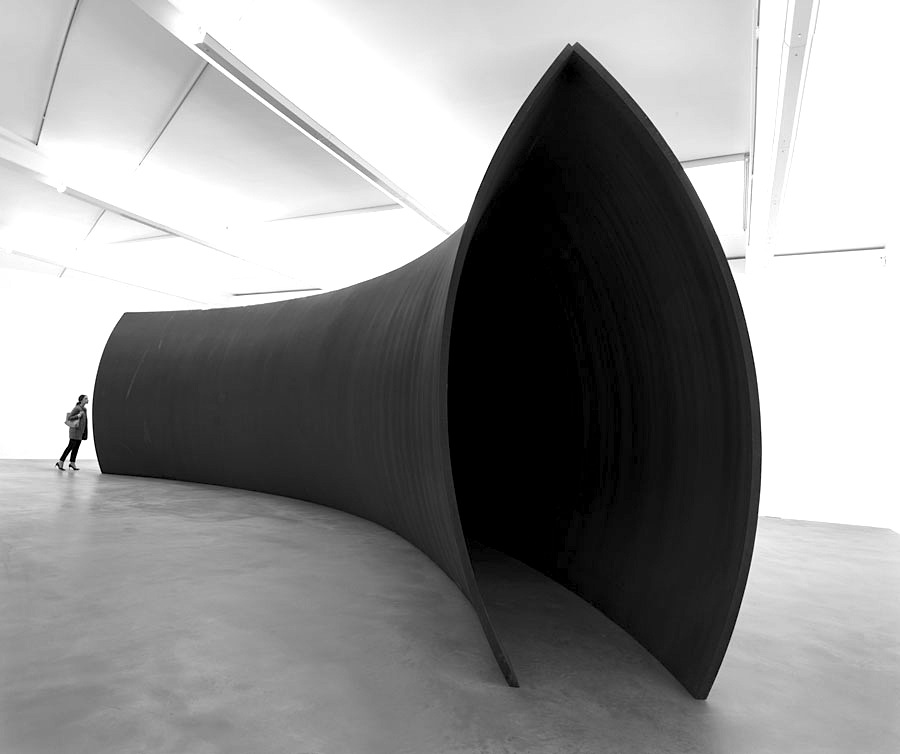 Then you come to the show’s pièce de résistance, titled Backdoor Pipeline (2010) and which has a truly profound – we might even say ‘beautiful’- phenomenological affect as you pass down its outer curve and as the enormous form seems to simultaneously unfold or inflate for you in a new form of organic architectural experience. Of course you note how it is made and that it seems potentially lethal (that has long been part of the work, the practice) but in the knowledge that these enormous, elegantly turned plates are designed and honed well enough to merely threaten obliteration without ever toppling as you then walk through their interior tunnel. Other punters look spellbound, enchanted, and some, once again, have their pictures taken with the work.

London Cross (2014) associates two crisscrossing multiple tons of geometric steel, suspending one above your head as the other blocks-off half of their specially built room from sight. Visitors hold up their phones in homage (a new kind of popular ‘political’ salute?), photograph the impressive joint, then nod to their friends in acknowledgement of their own relatively modest achievement.

Perhaps predictably, being the now seasoned art-appreciator you have become, you find the least spectacular work in the show to be the most valuable (and yes, judgement rears its ugly head at this point in the Post). Dead Load (2014), in the final room you visit, utilizes two simple forms, which seem to summarise something key and fundamental to Serra’s practice and his long career at the top of the top of modern sculpture. They do so without all the glitz and glamour, and sans much of the awesome engineering witnessed in the other rooms. Two fat lozenges of massy steel, one (crucially) slightly wider and longer and deeper than the other, are assembled like a couple of mismatching mattresses that invoke new measures of eternal sleep. The higher object seems to visibly weigh upon the one below and you almost feel you hear the lower one groan, setting-off the poor concrete floor as it too begins to whimper. Nothing more than the slight mismatch of size here is enough to give the piece sufficient opportunity to draw-out adequate interpretation, if only because it refers to difference and repetition, two fundamental principles that might, after all, lie at the heart of just abut everything we can think, know or experience.

Dead Load’s horizontal orientation makes it less grave, more deathbed and the proportions of its forms bring Marc Rothko to mind as if in oblique homage to an artist who knew how to consistently create ‘weight’ and gravitas with little more than well-chosen forms, a certain scale, an idiosyncratic process and varying depths of colour and tone.

Serra can be the most spectacular artist in the world but there is more to him than that, and you invariably see it when he offers you less.