You’ve had a strange week, spent in a kind of limbo. The academic year is over and so is your week’s holiday and this week was dedicated to preparing for the Summer School teaching that starts next week and goes on pretty intensely for seven weeks, through to September.

And yet, you found it hard to really get to grips with the preparation and organize your time. You were repeatedly distracted, diverted and felt your energies dwindle just when you needed them to be focused and abundant. You didn’t encounter much art, but as you devoted this Blog to an exploration of the possibilities of art criticism you will write about what art you did encounter.

A friend gave you some theatre tickets. Unfortunately they were not for one of the cutting-edge productions you have heard about and wanted to see but to a very conservative affair indeed. You pride yourself on aspiring to be a ‘Holistic Relativist’ who has published an article (in Art Monthly magazine) titled ‘Against Judgement’ and so you pride yourself on challenging your own prejudices, going against the grain of your own ‘tastes and habitual evaluations and thus took up the gauntlet and attended the show.

It wasn’t really a pleasant experience, though you tried to glean interest and value where you could. Inevitably perhaps, you found yourself sitting with still hands and unsmiling lips in an auditorium full of people clapping, laughing, smiling and whooping at things that you found neither amusing, exciting nor even unusual.

It was your birthday in the middle of this week and it made you reach for a poem about aging that you have long admired. The few poems you know have been, like everything else you know really, not encountered by means of any programmatic education but simply by the chance encounters that result form a late-starting life that affirms chance as a compass in the absence of any other social structuring.

The poem is called ‘Nel Mezzo del Cammin’ and is written by Bernard O’Donoghue. It appears in his mid-90s collection ‘Gunpowder.‘ You saw and heard him read it as an apt contribution to a conference at the Victoria & Albert museum many years ago with the tile ‘Material Memories.’ It’s a short but pithy poem so you can quote it verbatim here and then explicate a little.

No more overcoats; maybe another suit,

So the odd poem (two in a good year)

Won’t do to make the kind of edifice

I’d hoped to leave. Flush out the fantasy:

The mid-point being passed, the pattern’s clear.

This road I had taken for a good byway

Is the main thoroughfare; and even that

Now seems too costly to maintain.

Too many holes to fill; not enough time

To start again. “I wasn’t ready. The sun

Was in my eyes. I thought we weren’t counting.”

Basically the poem is about aging. The title is drawn form Dante and means the middle of the road. Dante’s ‘Divine Comedy’ begins with the idea of being lost in the middle of a life as in a forest, e.g. one translation of Dante reads: “In the middle of the journey of our life, I came to myself, in a dark wood, where the direct way was lost“)

O’Donaghue has started to measure the amount of coats, suits, combs (and eventually pencils and razorblades) that he will need to conduct the remainder of his life. These dumb, practical, material objects becoming an immanent trumping of all his transcendent and inevitably disappointed human and creative aspirations. 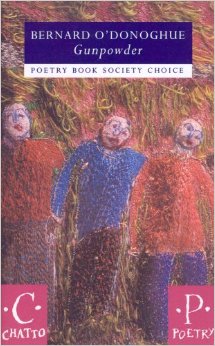 As an artist he expresses regret about the little good work he has really done, despite feeling capable of more. He insists on self-administering a dose of reality (“Flush out the fantasy”) and acceptance of the actual “pattern” of his own ways and means. “This road I had taken for a good byway” may refer to what he thought was special about his poetry or simply to the way each of us think of our lives as special, different, and the way in which none of us can believe that we will die. But it all turns out to be “the main thoroughfare.”

The final stanza is especially touching (and the audience at the V&A did shed a few tears on hearing the poem read in the poet’s deep Irish voice.) Here, the voice becomes pathetic and childlike, seeking in vain for an excuse for human and creative shortcomings, like a little boy who came fourth in a race or let in a goal during a school soccer match ““I wasn’t ready. The sun was in my eyes … ”)

The last line (after a purposefully inserted line-gap) returns to the first point about measuring out time in terms of everyday material objects but warns that the time will only get shorter, the objects more banal, less worldly, and smaller as experience and health will inevitably shrivel with further aging.

Yes, it’s been a bit of a moribund week, but a life in and with art is certainly not renowned for its consistency or the consistency of its highs. Lows are important too. Nevertheless, at times like this you fear the way in which your teaching so consumes you as to leave you almost bereft of purpose, motivation and identity in its absence.

You have often complained about the lack of time you have to nurture your own writing and image-making practices, and yet these sometimes fare best when fitted-in around the edges of a busy teaching schedule. You dream of a ‘sabbatical’ when you will have a chance to complete one of the many outstanding projects that lie, dwindling in your archive of unfinished projects, and yet fear that, given the time and opportunity you might lose momentum or become ill at just the wrong moment. You fear losing your job through aging, tiring, aching and breaking and all that this will mean in terms of losing justification, pride, identity, orientation and momentum.

But for now all you can do is prepare for what is going to be a hot and hectic summer spent teaching Art History in London’s wonderful museums (a real privilege you must say) knowing that, as soon as you see your new students and begin your first lecture, your spirits will lift and your energy and positivity return.