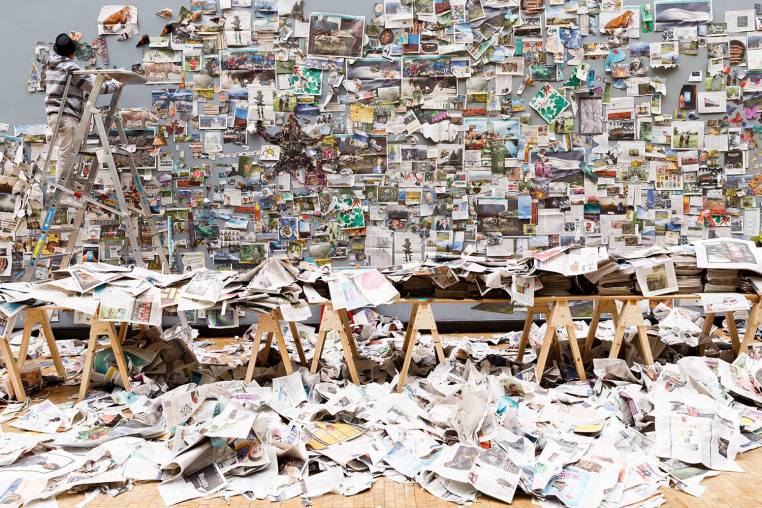 It’s been one of those painfully intense weeks when, as an ‘Associate Lecturer’, several of your small ‘contracts’ coincide uncomfortably and you find yourself working flat-out, through the weekend, rising super early and finishing late in the evening.

Thankfully -and despite bouts of exhaustion, frustration and occasionally ‘quiet desperation’- fundamentally it is all art, all education and thus all things that you fully trust and believe in, even if you are often -perhaps increasingly- concerned about the way art and education are managed, treated and used.

Aside from teaching two seminars and supervising several dissertations the main event you attended was the grand opening of an event that brought together the venerated veteran of the London art scene Gustav Metzger, The Serpentine Gallery, Central St Martins college and students, coordinated by artist, curator and director of CSM’s fine art studies Alex Schady.

The event is ongoing, online, and elsewhere. It is called ‘Remember Nature’.
You can find various links, including the following short video appeal by Metzger himself.
The project was also associated with Serpentine Gallery and their related link is here.

While individual students contributed works on the theme, creating a consistently fascinating show of innovative works (platitudes of a tired art writer I know, but true all the same), a large group of students also interacted urgently with thousands of Guardian newspapers to create a ‘Media Wall’ reflecting the ‘Remember Nature’ theme.

The final scene brought a true image of crisis into the CSM building and achieved what so much media notoriously fails to do, i.e. communicate a true sense of our real emergency. Thus a kind of neo-détournement (or radical editing) was achieved, which reminded you of issues related to art, media and terrorism discussed in last week’s Blog post (with reference to Don De Lilo, Johan Grimonprez, and Marie-José Mondzain.) 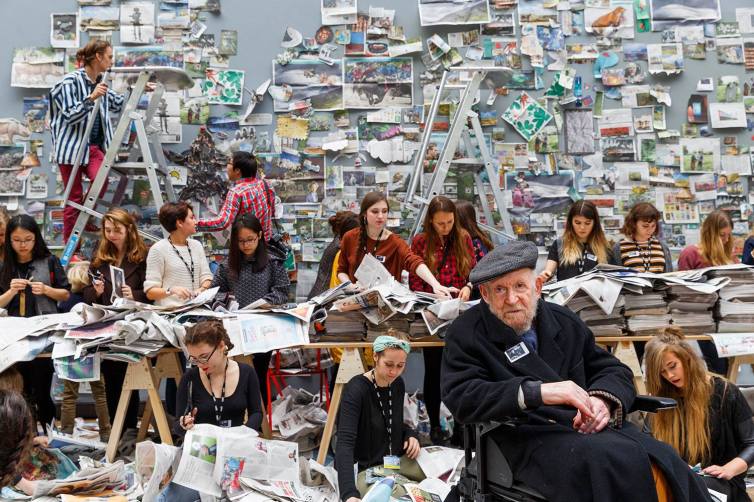 “Born in 1926, Gustav Metzger, who is best known for his concept of auto-destructive art, considers the work of art as a form of political consciousness-raising. He has also previously addressed the troubles in Northern Ireland, the Israeli-Palestinian conflict, terrorist bombings and global warming.“
CSM Website

Metzger is an artist of inspiring commitment and integrity who has always eschewed art markets to pursue truly critical practices that bring the purpose and value of art into view as a series of stark questions and propositions. You have often heard him intervene in gallery discussions, often with a political and philosophical perspective that suddenly undercuts the relatively banal ongoing art banter, towards which he expresses dissatisfaction, dismay and sometimes disdain.

Metzger’s own verbal, visual and enacted statements come from deep within a long lifetime of profound and conscientious consideration. In the short video statement he made to publicise the aims of this latest project he says:

“The art, architecture and design world needs to take a stand against the ongoing erasure of species – even where there is little chance of ultimate success. It is our privilege and our duty to be at the forefront of the struggle. There is no choice but to follow the path of ethics into aesthetics. We live in societies suffocating in waste.”

“Our task is to remind people of the richness and complexity in nature; to protect nature as far as we can and by doing so art will enter new territories that are inherently creative, that are primarily for the good of the universe. What we want to do – what is ahead for us is to bring together the world of the arts – to unite … We call those who engage in the arts to participate … to create a collective artwork to Remember Nature.

For you it’s the line: ” There is no choice but to follow the path of ethics into aesthetics …” that really jumps out. It doesn’t only concern this project or this issue but a spirit that has always guided your own approach to art’s making, teaching, research and writing, and which Metzger has here neatly, and powerfully ‘nutshelled’.

It seems increasingly clear that we are sinking deeper into an increasingly dark political atmosphere in which greed, power, hatred and hierarchy are being allowed to usurp many of the gains made by previous generations in trying to distribute wealth and opportunity, to reward talent and merit, to counter pre-judice, in the hope of creating a more horizontal and fairer approach to our increasingly diverse societies.

Artists and the art market (again see last week’s Blog Post) become, at such times, all too easily distracted by vanity, grandeur, reputation, and wealth, all of which can, of course, be precarious, short-lived, socially destructive and, in all these respects, of dubious ‘value.’

You believe in adherence to a primarily ethical approach to art, in which artists are educated more roundly and profoundly, not only to make entrepreneurial, self-interested careers but to take greater responsibility for their actions and to use their unique range of skills and platforms to develop truly ‘ambitious’ and truly ‘aspirational’ ways, ways in which art can participate more fully and more effectively as a primarily ethical agency, in a society that is otherwise grossly distorted and distended by its market (or capitalist-economic) dimension.

To ‘Remember Nature’ we have to always also remember ‘human nature’ (which famously caused us to be banished from Eden according to our gravitation to the state of acquisitive beings) and not allow ‘human nature’ to simply default to thoughtless, ‘dog-eat-dog’ aspirations to monopoly and supremacy.

‘Human nature’ is also capable of invention and innovation that dazzles itself and which can be applied to the invention of social structures and alternative ‘economies’ that pursue, perpetuate and proliferate e.g. equality, kindness, care, consideration, hope, health, and thereby increase the ‘wealth’ of a society ‘rich’ in its most ethical attributes; a society where everyone is invited and allowed to live fulfilling lives, without the constant fear of poverty, injustice, homelessness and unemployment; to live without constant fear of the future itself –  as so many of us, and yes, even skilled and qualified professionals like yourself, currently, and increasingly do.