One of your first really successful artworks was a series of photojournalistic pictures taken at a Buddhist monastery in Sussex. You’d approached the monks there, and at first they asked you not to come, but being young, ambitious and insufficiently considerate of the perspective of others, you’d persisted until they allowed your visit. One of the reasons they cited for not wishing you to come was that the presence of a photographer would make them unduly conscious of their own image and perhaps nurture unwelcome narcissism.

Your photography soon moved on to other concerns, but photojournalism, which often involves making creative and composed representations of subjects thereby rendered ‘other’, was one of the ways you gained confidence as well as access to higher education in the subject of Photography, Film & Television – your sideways entry into art by means of the arts of mechanical reproduction.

Today your own students struggle with dissertations that discuss the difficult problem of how to appropriately represent ‘others’ with photography. It’s all too easy for a privileged gaze to patronise and reduce those it portrays, and to use a powerful piece of expensive equipment to come between and stand-in for any real human empathy, thus leaving only a ‘beautiful’ or ‘tragic’ image where a more meaningful human connection might have taken place.

Renzo Martens’ infamous film ‘Episode III‘ illustrated the crude mechanics of media journalism with regard to The Congo while implicating the ethical problems of representing and patronising impoverished parts of Africa in general. The late and great Susan Sontag wrote a sophisticated essay on the subject titled ‘Regarding The Pain of Others.’ Today many photographers spurn or deny the kinds of promises and claims once made for photojournalism, e.g. that it might be used to bring humanity together by means of its special lingua franca that allows all to see others as also similiars – as famously promoted by the idealistic ‘Family of Man‘ exhibition that toured the world in the period immediately following the end of World War Two.

As these references dominate your view of photojournalism it was a valuable experience to have them challenged, refreshed and renewed this week by stumbling upon Enikö Nagy‘s exhibition ‘Sand In My Eyes’ at The Brunei Gallery. The Brunei’s audience won’t be surprised to find that the vivid, high definition documents of Sudanese life here show details of very different place, people and way of life, but what starts to draw you into the show’s very own ‘difference’ is an overwhelming and welcome sense of celebration which genuinely seems to break down and break through the usual ‘exoticising’ ‘objectifying’ and ‘patronising’ habits that haunt photojournalism as its own immanent critique. 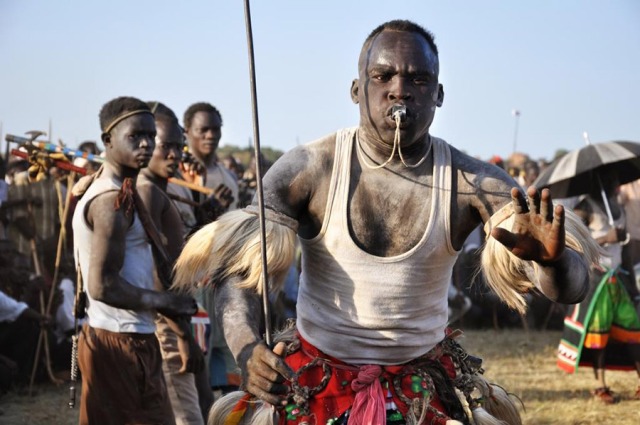 One reason for Nagy’s success is the enthusiastic incorporation of words in the show. The artist (who BTW doesn’t describe herself primarily as a ‘photographer’) later explained that this ‘oral literature’ in fact inspired the images, rather than acting merely as captions and adornments to photographs. That re-balancing of text and image, and that particular role of the artist/researcher are perhaps some of the factors that make this show so different.

If an abundance of words sounds like a put-off to those tired of art that is accompanied by extensive curatorial advice on how to ‘use’ or ‘access’ it, you can be reassured that Nagy’s most valuable selections are short phrases, wise sayings, maxims and witticisms of the Sudanese people which act as life-affirming gifts to the reader.

They also allow you to see the photographs themselves operating as something like a ‘motto’, particularly as the English translations are accompanied by their original Arabic script, which can’t help but appear – to the uninitiated- pictorial, decorative, ‘beautiful’ in itself. Thus, a photograph reclaims -by comparison – its own status as a kind of pictogram, a meaningful and enduring assembly of forms that aspires to the poetics and wisdom of the word.

By the time you have fully digested the show -and received some guidance from the artist whom you were fortunate enough to meet there- you realise that describing the show as ‘photojournalism’ is in fact inaccurate and reductive. It is rather an epic research exercise (involving five years of travel) and culminating in a sumptuous book safeguarding intangible heritage, and a touring exhibition with related events and responses.

No doubt Nagy can and will still have a whole book of ethical directives thrown at her for being ‘on safari among others’ – as one academic recently put it to you – but this particularly thorough and passionate project succeeds where others fail and, in fact, goes far beyond photojournalism.

Nagy spent several years and travelled for thousands of kilometers living in and with the people she photographed and as a result comes away with far more than just the kind of stunning and spectacular photographic record that you might be over-used to receiving in your Sunday supplement magazine.

In many ways this show, its accompanying publication, and the artist herself, all seek to reverse or re-phrase the usual gaze created by the tradition of photojournalism to show that, as well as its bad news, wars, famines and disease, Sudan is a country and a culture with much to offer the ‘rich West’ in terms of wisdom, way of life, joys, tolerance, economics and more.

Nagy is also reminding us that all of this is endangered but that it is a resource for humanity as a whole. Sudan contains a society that, far from being ‘underdeveloped’ or ‘barbaric’, has valuable contributions and solutions to all of our futures.

The show ultimately reminds you just how reductive, narrow, demonising and disempowering are the usual raft of images used by media to portray ‘others’ in terms of negative problems, dangers and fears.

Nagy’s own kind of positive response may run the risk of exoticism, and of celebrating a colourful surface that overlooks ‘grim realities’, but the dancing and smiling, laughing and chatting, travelling and trading people in her photographs are ‘realities’ too.

Thus Nagy succeeds in extending, going beyond, and exposing the ultimately oppressive attitudes and outcomes of much ‘serious’ photojournalism, which can be seen as a kind of weapon holding down ‘others’ under the yoke of carefully selected, edited and widely distributed negative imaging.

Nagy’s own photographs, by contrast, emphasise the gifts that so-called ‘others’ have to share with you, and all they have to teach you in different ways of thinking, speaking and living. 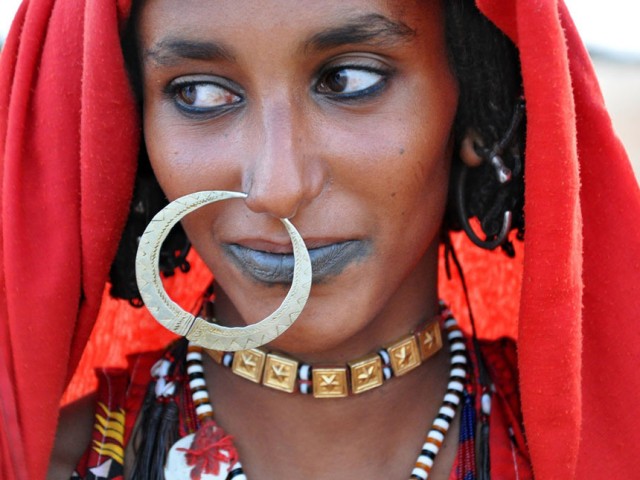 You leave the show wondering if the philosophically weilded cultural term ‘others’ is not in itself outmoded, wrung-out and anachronistic. Despite all the fears and tensions that face you today you are still living on the brink of the first truly global society, in which  there can perhaps be no ‘others’ any more. Nagy’s extensive research, her photographs, exhibition, and texts help you to reach this point in your thoughts.