Yov is dead, and so is You.

I killed them both, I admits it. I thought You would set I free and that Yov would set I freer. But I still hasn’t found the freedom I is looking for. Or maybe, I only found ‘freedom’ but not much else.

I is still writing events that emerge from some kind of a subject, a ‘writer’

Berry Gordy is on the Radio, telling his life story and playing formative and favourite songs.

How I loves the Radio.

I dreamed an uncountable amount of dreams, perhaps inspired by the white Lilac blooming in the night beyond the open window. Yes, no-one could see it and yet all could scent it nevertheless. Thus the Lilac sews strange seeds.

There have been many things to see this week and yet, when someone asked I what stood out it soon became clear that is was someone dancing. 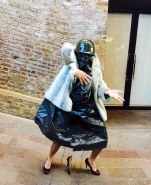 In one corner of a busy students’ exhibition someone was dancing. They had attracted a crowd but I was watching from afar, through the glass of a gallery space. The crowd were jubilant and locked into every move the dancer made.

The dancer may have been a boy, a girl, a transgender person etc. It did not matter. Their face was obscured by a strange kind of mask that tumbled down their chest.

This should or could have made the person seem frightening, ugly or strange, and yet, their moves were strangely familiar, beautiful and reassuring.

I never learned their name, their identity. It did not matter.

I watched them for several minutes, a smile on I’s face and moisture in I’s eyes. I silently celebrated, together with the dancer and the crowd, this image of the apogee of humanity.

If only people could dance to each other, at all times, instead of talking and writing. Surely then we would communicate only the best of ourselves.

I has only managed to write 354 words today, but then the word-count is just another presumption, another restriction, as is this horizontality, this verticality, this ‘writing’ …