You are making your way through London’s Aldgate, returning from  an evening event at The Whitechapel Gallery, followed by a quick sip of bitter beer at a trendy Brick Lane bar. Its September but the night air is still warm and a slight breeze makes your journey feel a little more romantic. Our latent capacity for romanticism grasps at us in such unexpected moments, in momentary affirmations of being alone, coming into contact with the self as a kind of adventure.

The Whitechapel event was curated by its film curator Gareth Evans who has developed a unique, slightly  DADA-esque and impressario-like style of introducing events. He manages to explain and name-check all the important information about the evening, the series of events in which it appears, the works you are about to see, the artists, sponsors and anyone else involved, while rolling out a rapid, risk-taking stream of consciousness which veers and swerves vertiginously from one speculative sentence into another, often diverted by an encounter with an explicit metaphor which then suggests an entertaining wordplay, which in turn sets off a new train of thought, which, though often at risk of departing entirely from the point, is suddenly yanked, like a car on a fairground ride, back on to some kind of track, while the audience, following every word with concentration, trepidation and occasional bursts of laughter, has to actively and collectively will the speaker to find some way back to the original point and purpose of his decorative proclamation and thus make sense – which he eventually, unfailingly, and almost miraculously does.

The featured artist was Marta Michalowska who has been supported for some years now by the Jerwood Foundation (see link below). She showed a triptych of short films grouped under the title ‘WITHOUT’ and which included: Without Reflection (2011/15), Without Shadow (2011/15) and Without (2016).These films are based on the artist’s mother’s widowhood.

Michalowska also screened Drawing in Space, Drawing in Time (2016) in which two artists – Meghana Bisineer (animation) and Julian Wild (sculpture) – were interviewed about their work and collaborated on a large drawing, while explaining, exchanging and sharing their motivations, processes and aims. Following the first screening Michalowska was also in conversation with artist Dryden Goodwin.

You often try to visualise for, and with your students, the creative excitement of making a connection between two apparently unconnected thoughts, ideas, images, scraps of found material, historical events etc. The more distant and different the elements are and thus the more unlikely they are to be connected, the greater the satisfaction to be found in finding or building the connection. You can almost feel the pleasure of any such synaptic connection being made, and this seems to point to, what for you, is the pleasure of making and thinking as an artist. Subsequently, the connection you have built is often more important and valuable than the objects themselves. 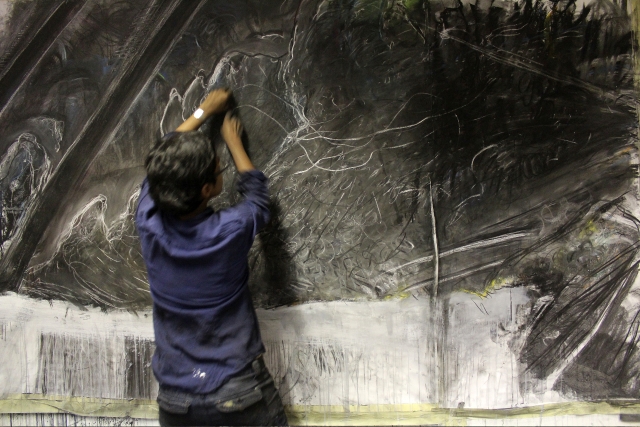 In Michalowska’s Drawing in Space, Drawing in Time you are left with a kind of medley formed of the generous offerings of two very different artists who, not only make a work of art together in the film but become a work of art together in and as the film. The film leaves you with a strong sense of that enjoyment described above, of making connections between the previously unconnected, fusing distinct and diverse practices, producing an elusive synthesis that is something other than and more than the sum of the components.

In the film a certain geometric linearity encounters a material fluidity, the assertive marking of a site is overwhelmed and suffused by the irrepressible animation of a dynamic line. Wild uses a mix of intuition and rigour, gesture and polish to produce his accessible, intriguing and entertaining public sculpture. Bisineer produces deeply rendered emotive drawings (often drawn from the experience of motion and travel) which she photographs as they evolve and subsequently animates the results.

The triptych (or trilogy) screened after the discussion with artist Dryden Goodwin is a very different work, triggered by the death of the artist’s father and reflections on her mother’s new state of widowhood. Here Michalowska’s camera lingers around the family house, itself a kind of yearning and lost soul, nervously  observing a world from which it is necessarily detached  – or ‘without’.

The mother is first glimpsed from behind and we see only her hair. This image reminds you of the 19th century Danish painter Hammershøi‘s (1864 – 1916) domestic interiors in which a woman almost always has her back to the artist.

Atmospheric encounters with domestic details – bed sheets on a line, close-ups of patterned glass and details of lampshades- leads the trilogy on, out of the house and on to a beach where you, the artist, the camera again follow the mother at a kind of respectful distance, as if she should not really know we are there, or as if her privacy and grief must be cherished.

In a slightly Doppleganger-like mode, and encouraged by a sensitive soundtrack composed by Billy Cowie,  you persistently trail the mother,  whose very gait seems slightly wayward, as if she has been disconnected not only from her husband but from her internal compass. She is bereaved, but also strangely freed, freed of purpose and direction.

And so it seems significant that when she comes to a crossing of paths she seems to make arbitrary gestures with her hands before wandering on; and that, when she comes to a pile of felled trees, she walks along one of them, balancing in tentative, girlish steps that you sense she might not have been made had her husband still been at her side.

After continuing across gentle snow bound hills you follow the widow through the forest, which eventually leads to a cemetery where graves are beautifully patterned amidst the trees, and where the Polish, (possibly Catholic) community seem to conscientiously, and touchingly care for the graves, as each is illuminated, while the sun sets on the scene, by a lighted candle.

The Jerwood Foundation link is HERE

One thought on “94. Marta Michalowska at the Whitechapel Gallery”