The first full week of the teaching term saw you cycling from Camberwell to Chelsea and to Kings Cross most days and spending four out of five days of the week  wholly immersed in dialogue with students (so great to get back to this!) The 5th day was spent in making plans for book launch events and distribution issues.

Everything is ‘full-on’ as they say. You are also writing a small book that requires getting up and starting work at the desk one or two hours earlier every morning. Furthermore, there seem to be more and more evening events you feel cannot be missed and so you are starting to see a pattern of 13- and 14-hour days emerging, followed by some quite sound sleeping (touch wood!)

Sometimes you feel your life or your health or your career are going to burst at the seams, but you also feel a kind of thrill at keeping on top of it all and revel in the diversity of information you can receive in a day or a week being busy in the arts in London.

Of course, if your youth had not been so misspent, lost, impoverished, powerless and neurotic you may be able to enjoy a more leisurely and simple life now, but as it is, you feel you are constantly striving, along with the 20-somethings, to achieve all those things that were impossible and unreachable when you were younger, despite the way your heart always ached to: do an interesting job, make and show art, teach and write, make books and make music.

You strong sense of ‘making-up-for-lost-time also makes it impossible to drop or neglect anything you are interested in, as all were so frustrated in your youth. Now that your various interests and abilities do have opportunities to shine you keep nudging them all along, like a shepherd keeping a little flock of careers moving in some kind of order, allowing none to drift away or fall behind.

On Monday, at Chelsea you were fortunate to bump into Sonia Boyce who pointed you in the direction of an exhibition in Chelsea college spaces titled ‘Now! Now! In more than one place’ It’s part of the ‘Black Artists & Modernism‘ research project, which also held a conference connected with the show.

You’ve known Sonia Boyce ever since your very first ever published art writings appeared in a black womens’ monthly magazine called ‘Pride’. A friend you met on a short journalism course hooked you up with the editor of Pride who asked you to find and profile and photograph one black woman artist per month for the magazine. Your feature got a bout a fifth of one page and the rest of the magazine was fashion, beauty, hair, advice, music etc.

It was a great adventure and challenge at that time (the mid-90s) to find the artists and interview them etc. And along the way you discovered the strangely separated world of black arts in 90s Britain, with its own meagre funding, profile and institutions, such as the African & Asian Visual artists Archive, INIVA and others.

You hoped, at the time, that this would become your specialist field of expertise and that you could, in this way make a significant contribution to arts in Britain by supporting and publicising this under exposed scene. Your MA studies, then the onset of teaching subsequently took you off into many other speculative and plural directions that you also wanted to explore and maintain, and so you drifted out of touch. But you still bump into everyone from that scene, noting everyone’s noble progress and hoping you will work together again, when the stars realign in appropriate patterns. 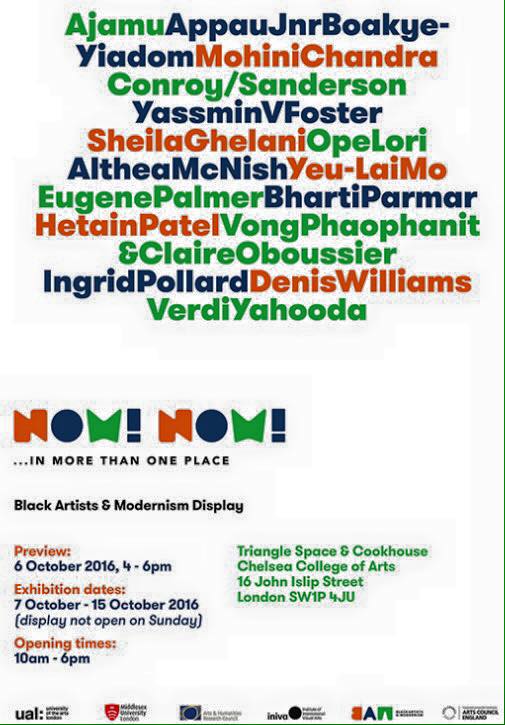 As you didn’t attend the BAM Conference its unwise to comment on the agenda pervading both it and the exhibition, but Sonia Boyce and her BAM colleagues seem to be persistently and inventively negotiating the, still shocking and shameful way in which our society is  divided, socially, economically, and in other ways too, according to cultural difference, diaspora, and difference of appearance.More and more however, the emphasis seems to be on turning insistently towards the contributions to contemporary art and art history of artists, in the context of isms and movements shared across a broad diversity of cultures.

Reading the newspaper-style catalogue that accompanies the Chelsea show you glean the sense that artists, theorists and historians informing this project still have to fight and re-fight age-old battles with terminology that amounts to a kind of taxonomy, against language therefore, against pre-judice and various forms of xenophobia and racism, some more explicit some more insidious than others.

Clearly this is a timely show and research project that all thinking, conscious artists should note, and if possible support at this unusually divisive and destructive social moment in Britain. What most impressed you about the exhibitions was the oblique, surprising, subtle, humorous, inventive, intriguing and, yes, beautiful ways in which these long-standing issues are being approached and re-approached today.

Last night you also attended the PV for an ‘Bad Behavour Open 2016’ show at Brixton East, organised by ex-students who now work together under the group title ‘Bad Behaviour‘. You were one of the selectors and judges and so it was great to see how decisions, based on slides, came together in the reality of a hang and an opening event. Most of the works you had helped to choose had a slightly dark, monochromatic, haunting, complaining, itchy, scratchy, and political air to them (including a portrait of a laughing Farage), so it was perhaps good that one of the other judge’s selections were more comic, bouyant and vivacious.